Sharing precious moments with someone in the advanced stages of dementia

Visiting a relative or friend in the later stages of dementia can be a bewildering, and even frightening prospect. Not knowing what to do or say, feeling self-conscious in front of other relatives or care home staff, and even fear of unsettling the person you’ve come to visit, can all add pressure to the situation, particularly if the person you are going to see fails to recognise you, or presents strange and unfathomable behaviour.

Magdalena Schamberger, from the Scottish charity Hearts and Minds advocates a gentle, reactive approach to take away the pressure. Don’t go in with an agenda or expectations as this is likely to cause frustration and upset if these are not fulfilled. As she puts it, “Take time and just be”. Take the lead from the person you are visiting and allow them to be the person they are right now.

Here are 5 simple suggestions to help you do just that:

Spend some time without feeling the need to do or say anything- however alien this may at first feel.  Make eye contact, be still, and just enjoy being together without judgement or expectation. Even everyday tasks such as washing, dressing and eating can be fraught with difficulties, so leaving tasks to one side for a moment and just being still, holding hands and breathing together can be relaxing and provide a meaningful moment for both of you.

Holding a one-sided conversation, asking questions and contradicting what someone is saying (even if you are right!) puts pressure on both of you and can quickly become distressing. Instead listen carefully and respond positively to any interaction. Go with their flow, even if it is nonsensical . Rhythm and repetition can be a useful strategy to try if the person you are visiting is unresponsive. Repeating the name of your relative or friend to a familiar melody may make a connection, and help them realise you are there for them.

Try to do a physical activity if the person is still capable to doing so. This removes the need for verbal responses which can be so difficult in the later stages of dementia. Activities that you used to do together (such as baking, DIY or gardening ) can provide a positive experience in the moment, even if the person won’t remember it afterwards. Activities could be something as simple as a hand massage with a scented oil or cream, or perhaps a rummage box (containing familiar things that they used to enjoy doing, or pleasantly tactile objects to hold) for the person to hold on to and fiddle with.

Physical contact is important. Although the person you are visiting may be distant, confused or unsettled, they still have feelings and emotions. Hold their hand and give them a hug. Remember agitated behaviour may be a sign that they are hungry, thirsty or in pain, so check their basic needs are being met and they are not uncomfortable.

Listen to some favourite music, sing, smile, laugh and dance together. Get out of the daily routine for a little way and enjoy  a shared moment together.

Hearts and Minds is a Scottish charity which aims to improve the experience of people in hospital and in hospice, residential and respite care by using the performing arts to encourage communication, interaction and laughter. 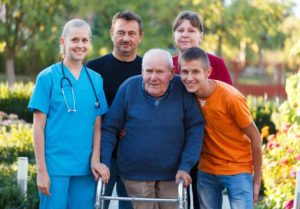